Police claimed to have shot the 11 year old kid as he was running away from them. He was shot in the back climbing the fence, is what they claimed. The officers said , in the preliminary questioning in court in Tulsa, Oklahoma that  he appeared to be holding a dark object in one of his hands. They ordered him to stop but he kept climbing the fence, so they shot him from 15 feet away.

They claimed that they saw him run around the corner from Indianapolis to Reading street and gave chase. They followed him to the indicated yard and walked up into the back yard from the street in front of the house, where they parked the police car. They claimed to have shot him in the back yard of the house. But there was no gun shot.

The gun shot happened about ten minutes before that. The picture diagrams the incident in detail. The point where the kid was actually shot was between two houses. The one house is torn down. There is a house next door to that house where the Rustoleum stain could be seen, where the blood stain from the wound was apparently covered up. Over a period of several years it started to stand out from the rest of the peeling house paint. At some point, the blood stain could be seen as a darker spot beneath the fading Rustoleum. 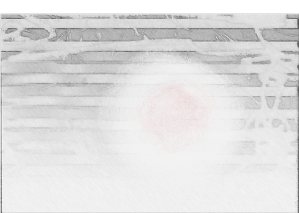