via The Jerry Sandusky Facts- Penn State Trials- READ CAREFULLY! READ VERY CAREFULLY. READ IT. STUDY IT! | DonRobbinsNewC magazine2.Alamo bowl- Nothing happened between Sandusky and the child he saw with his wife at the game. There were no charges dropped because there were no charges filed in the first place. The suspicions were dropped about Sandusky after the kid admitted nothing happened between him and Jerry Sandusky.

1998 Shower Room (Student Athlete Services building) Not Sandusky-  * A man who looked like Sandusky with a (child impersonator) and George Steinbrenner and chauffer making a video- mocking a sexual assault.
Sandusky was not present. Calhoun was apparently told it was Sandusky. (It wasn’t Sandusky.)
Office broken into later that week -where report on incident was probably filed. (In the Student Athletic Services building.)
Security guard- myself and Calhoun witnessed the video taping in the shower room.

2000- Lasch building shower room incident, where Petrosky saw, with Calhoun, the same man that Calhoun saw in the shower room in 1998. (Not Sandusky.) It wasn’t Sandusky. The child imposter was probably with him at the time.

2001- Shower room incident in the Student Athletic Services building. No person present in the shower room. Sounds only. Most likely, sounds from fake tape made in 1998. Some of the same people saw me- and played the sound effects when I entered the locker room- with the people touring the campus.
Log entry about the incident in Paterno’s notebook. (In the building where the incident happened.) Handwritten by Paterno.
(I witnessed it.) I was there in the office when he wrote the notes on the incident.
Other information about the incident was typed on a paper in the office in the Student Athletic Services building office-  (same office-and Paterno was there)- down the hall from the locker room. That paper was apparently filed in his office, by Schultz, and then forgotten about.

2001- No other incident concerning a shower room on campus.
Nothing was reported in 2001 about Jerry Sandusky. The incident that McQueary reported was actually in 2002. The Prosecutors were wrong. Whatever evidence they had about the 2001 incident was in the Student Athletic Services building at 9:00 in the morning. That evidence has not been made public. There may have also been a video tape that people thought Sandusky was in , but wasn’t. (It wasn’t Sandusky.)

2002- Nothing happened. -Mcqueary saw a man who looked like Sandusky with the little man. (Child imposter) Little man had light brown wavy hair, gray blue eyes, was about 4’7 feet tall. Weight about 100 pounds.

Did the look alike convince people he was Sandusky? Did he fondle children to make people believe it was Sandusky? We know he was making a video tape in the shower room in 1998. If people saw the tape they may have assumed it was Sandusky and then thought he was guilty. Is that the reason they became so motivated and sure he was guilty? 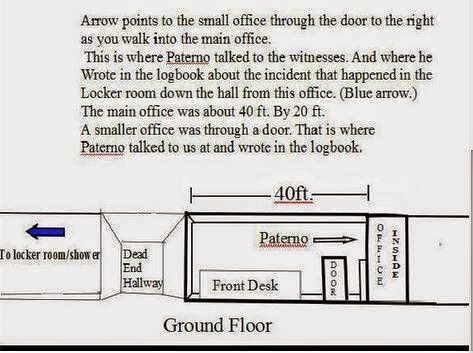 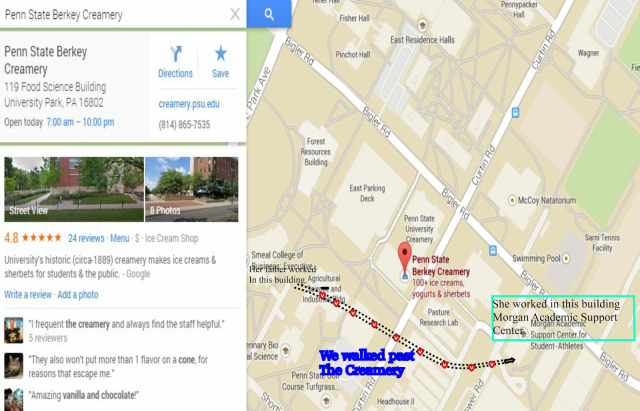